It’s not photo-shopped, says the unnamed Department of Transportation employee who posted traffic cam stills of “bigfoot” captured at Sherman Pass, in a remote part of Washington.

The employee later Tweeted that there’s a story behind it, ask the sign shop manager.

Older screenshots, however, don’t seem to reveal anything suspicious at the location. The department promised there would be more to the story in the future: 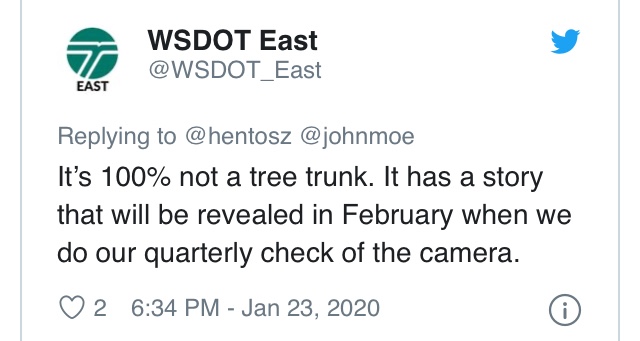 Some on Twitter pointed out that it seems to be frozen in place minutes later in another still image. Why not post video? Guesses on Twitter ranged from a real Sasquatch, a tree, a shadow, a cardboard cut out, and a guy out for a jog wearing a hoodie.

According to one Twitter user, you may want to check out the Bluegrass Parkway’s wooden cut out for comparison.

A different DOT account posted a video of a man, or a Bigfoot walking through the snow captured on the wildlife overcrossing on I-90 just east of Snoqualmie Pass, also in Washington state.

This one is definitely walking.

Back in January 2015 in Arizona, the DOT there posted another bigfoot traffic cam still image that got a lot of attention.

Having a little fun on Facebook and Twitter is nothing new for Departments of Transportation, and we can’t blame them.

Check back, we will update this post when the answer is revealed.

Whatever this may turn out to be, for more bigfoot information, check out the Bigfoot Kialo debate.