Are there any hover boards or devices that will let you fly? Maybe, if you have the money, the skill and fearlessness. The video below shows real flying machines that work, for their inventors, at least. For example, the video says in one place that the AeroX should be available to consumers in 2017,  but now in 2020, it doesn’t seem from their web site that they are selling the cool looking copter bikes to consumers.  They were supposedly going to sell them for for $150,000, but that was the previous model. Wait and see. 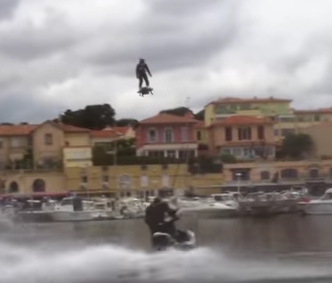 The … Flyboard Air can reach an altitude of 10,000 feet — more than three times the height of the Burj Khalifa, the tallest building in the world — hit speeds of 93.2 mph, and fly for about 10 minutes at a time.

In the test shown on video, however, the device flew at 35 mph for just under 4 minutes and at altitudes far below 10,000 feet.

… if it’s real, the Flyboard Air would appear to be a huge leap over the others, offering true flight on a small device with few limitations.

They all look fun to try, but the most interesting to me was the Flyboard Air. Is it real? .

If this is true, that means this personal hover board will move faster than even the fastest unmanned drones, which top out around 80 mph for comparable-sized machines. A lack of detail on the design, control, and a questionably edited promo video, have started to raise some red flags, however.

The Flyboard Air was developed by Franky Zapata, the daredevil entrepreneur behind the popular water-powered Flyboard. In the interview, he reveals that this new hover board is powered by jet fuel, which is contained in a backpack strapped to the rider. The board also packs four 250-horsepower turbo engines to keep you flying, with two more on the sides to stay stable.

Zapata and his team actually developed a special algorithm for stabilization. Each engine can be manipulated individually to change the angle and thrust. It can even fly on just three engines, making it possible to land safely if one engine fails mid-flight.

He also admits to crashing once already. Thankfully, it was above the water, and the only real damage was to the hoverboard’s electronics. Zapata also said he’s almost ready to try flying above solid ground.

How long until people are flying all over the place?