In Africa, it was discovered by Stanford researchers that elephants hold conversations with rumbles and ear flaps when deciding to leave a watering hole. Here is a quick example of an elephant rumble communication. In the distance, you can hear a male trumpet a response.

Elephants can “hear” very low sounds with their feet and can communicate for up to 6 miles using rumbles which travel even farther than their trumpeting sounds.

Elephants have a great sense of hearing and can send vocalizations a long distance. The species makes a variety of sounds, including snorts, roars, cries and more. But they also specialize in rumbles and are able to pick up sounds in a more unusual way.

While trumpeting may be heard a good distance away, elephants can also communicate in a low rumble that can travel as far as 6 miles, and what’s more, the elephant receiving the call picks it up through its feet. (MNN)

Here is more about the communication study and the fact that elephants “talk about” leaving to reach an agreement before they leave a watering hole. 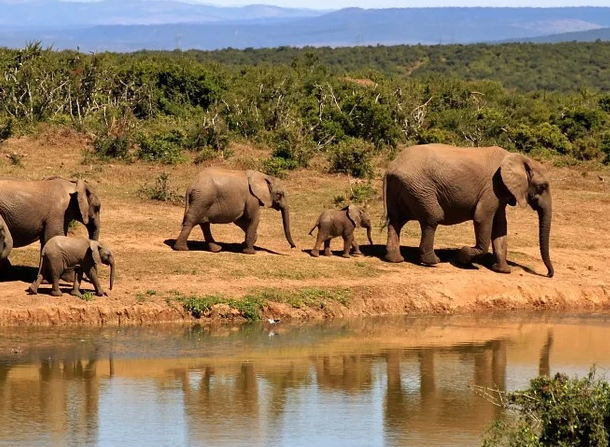 In the wilds of Africa, when it’s time for a family of elephants gathered at a watering hole to leave, the matriarch of the group gives the “let’s-go rumble” — as it’s referred to in scientific literature — kicking off a coordinated and well-timed conversation, of sorts, between the leaders of the clan. First, the head honcho moves away from the group, turns her back and gives a long, slightly modulated and — to human ears — soft rumble while steadily flapping her ears. This spurs a series of back and forth vocalizations, or rumbles, within the group before the entire family finally departs. This curious behavior, measured and documented in a study published in the October issue of Bioacoustics, shows how this cognitively advanced species uses well-coordinated “conversations” to initiate cooperation within the group, said lead author Caitlin O’Connell-Rodwell, PhD, a field biologist and instructor in otolaryngology at the Stanford University School of Medicine.

There could likely be similarities in the sounds of all large animals, but if you think elephants sound like dinosaurs, keep in mind that no one has ever heard a dinosaur! Elephant sounds were used in movies like Jurassic Park to create what the movie makers thought dinosaurs should sound like, so those are probably what most people think of for dinosaur sounds.

Actually, several different animals were used in those movies, including mating tortoises(!), but the T-Rex was an elephant… although not the kind you might think.

that bone-shivering, theater-shaking T. rex roar: “The key element of the T. rex roar is not a full-grown elephant but a baby elephant,” said Rydstrom. “So once again, a small animal making a small sound slowed down a little bit has more interest to us than what a big animal might do.” (Vulture)

Don’t be too surprised that elephants communicate. Animals communicating can probably be traced back to the first multi-cellular organisms.

In addition to chemical signaling, it was discovered that bacteria use brain-like bursts of electricity “to organize and synchronize activities across large expanses. … Süel’s team showed that by exchanging potassium signals, two Bacillus biofilms can “time-share” nutrients. In these experiments, two bacterial communities took turns eating glutamate, enabling the biofilms to consume the limited nutrients more efficiently.”

It is pretty strange to consider. Think of all the hidden communication going on all around us… and inside of us. Life is amazing. 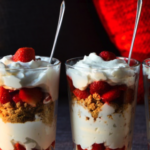 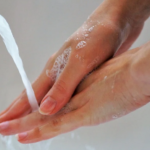 Being surprised at an animal’s ability to communicate effectively within a social group is really just a measure of how primitive we humans really are.