Today’s stop on our world tour of true strange stuff: two human lightning rods. The first is Roy Sullivan, a bear smacking park ranger who survived being struck by lightning seven times. Who else ever (quite reasonably) kept a bucket of water handy in his truck for when his hair caught on fire?

The Amazing Story of Roy Sullivan

It was virtually impossible, but it happened to Roy Sullivan, nevertheless.

Roy Cleveland Sullivan [LEFT] (February 7, 1912 – September 28, 1983) was a United States park ranger in Shenandoah National Park in Virginia. Between 1942 and 1977, Sullivan was hit by lightning on seven different occasions and survived all of them. In [a] photo of him … a prominent burn mark is visible on his ranger hat.

You may read that  Melvin Roberts [ABOVE RIGHT and BELOW] A retired heavy equipment operator, from South Carolina, at 63, held the Guinness World Record for “most lighting strikes survived,” having been hit 11 times.

The actual Guinness web site, however, gives the title to Roy Sullivan and the world record site has no search results found for Melvin Roberts as of February 2020. Perhaps “the Sun” publication in the UK didn’t fact check?

Not everything from a big name news source will check out if you look into the details yourself. A site that purports to check the bias of news sites says the Sun has numerous failed fact checks.

Out of curiosity, we looked up our own site, TrueStrangeNews.com, but we are not listed yet.

We aim to rate similar to Snopes, a well known fact checking web site, of which the media bias site says, “Overall, we rate Snopes on the left side of Least Biased based on infrequent stories that favor the left. We also rate them High for factual reporting based on transparency and proper sourcing of information.”

Snopes currently has nothing on Roy Sullivan or Melvin Roberts (Feb 2020).

A source we like to check, Wikipedia, has a media bias score which is rated as quite good, according to the Media Bias Fact Check site: “Overall, we rate Wikipedia Least Biased based on a wide variety of content and High for factual reporting due to proper sourcing of information and several studies that reveal acceptable accuracy of information.”

This does not mean there are no errors on the huge site, but it is a good place to start when you are looking into something. The details of Roy Sullivan’s experiences on Wikipedia are an astounding read.

Roy was first struck in April 1942 while hiding from a thunderstorm in a newly built fire lookout tower with no lighting rod installed. The tower was hit “seven or eight times.”

Inside the tower, “fire was jumping all over the place”. Sullivan ran out and just a few feet away received what he considered to be his worst lightning strike. It burned a half-inch strip all along his right leg, hit his toe, and left a hole in his shoe.

His next hits, all documented by the superintendent of Shenandoah National Park, R. Taylor Hoskins were as follows:

July 1969. Roy was hit while in his truck, driving on a mountain road. While it is true that the metal body of a vehicle normally protects people by acting as a Faraday cage, in this case the lightning first hit nearby trees and was deflected into the open window of the truck, knocking Sullivan unconscious, burning off his eyebrows and eyelashes, and setting his hair on fire. His uncontrolled truck stopped near a cliff edge.

1970. While in his front yard, lightning hit a nearby power transformer and from there jumped to Sullivan’s left shoulder, searing it.

1972.  While working inside a ranger station in Shenandoah National Park, another strike set his hair on fire. He was unable to put the flames out with his jacket and he could not fit his head under the water tap, so he used a wet towel. After the fourth strike Sullivan began to believe a force was trying to destroy him and for months, after that, whenever he was caught in a storm while driving, he pulled over and would lie down on the front seat and wait until the storm passed. This is also when he began carrying a can of water in case his hair was set on fire again.

August 7, 1973. While patrolling in the park, Roy Sullivan saw a storm cloud forming and drove away quickly.

But the cloud, he said later, seemed to be following him. When he finally thought he had outrun it, he decided it was safe to leave his truck. Soon after, he was struck by a lightning bolt. Sullivan stated that he actually saw the bolt that hit him. The lightning set his hair on fire, moved down his left arm and left leg and knocked off his shoe. It then crossed over to his right leg just below the knee. Still conscious, Sullivan crawled to his truck and poured the can of water, which he always kept there, over his head, which was on fire.

June 5, 1976. On this strike, he again saw a cloud and again thought it was following him. He again tried to run away, but was struck nonetheless, suffering an injured his ankle.

June 25, 1977. On this Saturday morning, Sullivan was struck while fishing in a freshwater pool, at the time, he had a trout on his fishing line. The lighting hit the top of his head, again set his fair on fire, traveled down and burnt his chest and stomach. At this time, as if the unexpected lightning was not enough, a bear approached the pond and tried to steal the trout from his fishing line. Sullivan struck the bear with a tree branch and claimed that this was actually the twenty-second time he had hit a bear with a stick in his lifetime.

Roy Sullivan might actually have been struck one more time. He couldn’t prove this one, but said that the first time he was struck was not in 1942, but much earlier when he was a child. While helping cut wheat in a field, lightning struck the blade of his scythe without injuring him.

The Amazing Story of Melvin Roberts

Next, meet super human lightning attractor Melvin Roberts. A video made after he’d been struck six times tells what it was like. Here’s another news report, at which point Melvin Roberts claimed he had been struck 10 times. New world record, if verifiable. Here’s what he said the experience was like.

‘It’s like grabbing an electrical cord. You don’t feel the burns until it’s over with,’ heavily-scarred Roberts told ABC News. ‘It cooks you from the inside out like being in a microwave. And you’ve got a hurting in your bones.’ … Roberts made headlines in 2011 when a lightning rod struck his watch – the sixth time he was zapped. His wife Martha said he’s been hit four times since.
Link

Are the claims of Melvin’s wife Martha  accepted? At number 11 there was not enough medical evidence, so he was not included.

A 62-year-old man from South Carolina, Melvin Roberts, claims that he has been struck by lightning 11 times in the last 12 years. However, the Guinness World Records says there isn’t enough medical evidence to include him on their list.

From the Weather Channel:

Officially, then, the record is seven verified lightning strikes, plus one unverified, for Roy Sullivan. The unofficial and unverified claim is 12 strikes for Melvin Roberts.

What are the odds?

Let’s look at the odds of being struck by lightning in the USA. The answer depends on who you ask and what historical time period is considered.

That’s quite a difference, but for the sake of calculations, let’s go with the lesser National Geographic estimate of 3,000 to 1 odds against getting hit during an average American lifespan of 80 years.

The probability of an event is the number of ways it can happen divided by the total number of outcomes.

If your odds are 1 in 3,000 of one strike in a lifetime, what are the odds of two strikes in one lifetime?

Let’s look at a simpler example first. What are the odds of getting at least 1 “heads” in two fair coin tosses?

For two coin tosses, the total possibilities are: 1. two heads, 2. two tails, 3. heads then tails, and 4. tails then heads. This can be written in shorthand.

In three of those four ways that two tosses can happen, a head appears. Therefore the odds are 75% in favor.

How you get from 1 in 2 odds on one toss to 3 in 4 odds on two tosses may still not make intuitive sense. Here’s how the math works:

In three coin tosses, the odds of getting a head are even greater:

Using these examples, we might think that the odds of being struck by lightning twice in a lifetime are

In other words, it is almost 100% certain you will be struck twice! Uh, no, wait… what did we do wrong? We just calculated the odds of not being struck twice by lightning in a lifetime.

Said another way, the odds are that someone will be struck twice once every 9 million lifetimes.

What about seven strikes?

The Odds of Seven Lighting Strikes In Perspective

The odds are that once ever 2.187 oktillion lifetimes, someone will be struck by lightning seven times. If you think that number sounds pretty crazy, it is.

What does this mean? Either my calculations are wrong, the odds are wrong, this may be the most unlikely thing to ever happen in the universe, or this universe is not behaving according to probabilities as it should. To some, this is a sign that we are living in a simulation which allows unlikely things to happen. This keeps our virtual lives interesting and makes for a better earth amusement park.

There is also the fact that both men survived all strikes by lightning which they experienced. A lightning strike transfers several 100 million volts of electrical charge. What are the odds of dying from a single strike?

Most people would assume that almost all a lightning strike leaves behind is a small pile of ashes. In fact, dying from a lighting strike is relatively uncommon. Mary Ann Cooper, a professor of medicine at the University of Chicago, estimates that nine out of 10 people struck by lightning survive.

Here’s how to improve your odds of surviving a strike, advice from Dr Mercola:

If you’re stuck outside during a thunderstorm, crouch low to the ground with your feet close together, but avoid lying on the ground or standing under or near a tree

While crouching in this way, if a lightning strike does come through you off the ground, the current will most likely travel up one leg and down the other, missing vital organs like your heart

The Earth is struck by lightning thousands of times each minute, so the Earth carries an enormous negative charge; it’s always electron-rich and can serve as a powerful and abundant supply of antioxidant free-radical-busting electrons that can be absorbed via your bare feet.

If someone can get struck by lightning seven times, perhaps the True Strange News can invent anti-gravity, sell it for $300 billion, cure cancer, make old age optional, get the world working together, clean up the planet, colonize a few more backup planets, then write a few 100 excellent songs in our spare time.

What would you do in an absurdly improbable universe?

Guess what? You’re doing it.

If you just scrolled to the bottom for the answer: Roy Sullivan has the most verified lighting strikes survived, with 7, plus 1 unofficial strike as a boy. In terms of unverified claims the record is 12 strikes survived by Melvin Roberts. 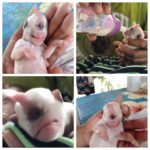