Many are sharing on social media that the new US Space Force logo is a “rip off” of the Star Fleet Command logo from Gene Roddenberry’s Star Trek franchise, but there is more to this story than meets the eye. Yes, it does look very similar:

Context is important, however. What seems like an obvious case is not always what it seems. With due respect to Mia Farrow there is an overlooked but relevant fact. The US Air Force’s Space Command logo on patches in 1961 predate the very first Star Trek episode. Star Trek‘s pilot episode, “The Cage”, was completed between November 1964 and January 1965. Star Trek aired its first episode—”The Man Trap“—at 8:30PM on September 8, 1966. The Trek delta shaped  insignia appears on the shirts of the three bridge crew members including Mr. Spock in the first few seconds of that first episode.

The delta insignia was first drawn in 1964 by costume designer William Ware Theiss with input from series creator Gene Roddenberry. The delta — or “Arrowhead” as Bill Theiss called it — has evolved into a revered symbol and one that’s synonymous with Star Trek today

We’ve always liked the original logo. It looks like a representation of a star that is seen stretched as it would if you saw it while using a Warp Drive. The Warp Drive being the technology that most enables Star Trek stories to exist, it made sense as that, at least to us, but we’ve never heard anyone else say this.

In 2018 there was a post explaining the Starfleet Insignia was based on the NASA Astronaut Pin. Even before the pin which was adopted in 1963, there were special astronaut wings awarded to members of the Navy and Air Force branches who flew into space. In it, you can see the delta shape, at least as the trail behind the star.  See the story on Space.com for more.

In the original Star Trek TV series there is an episode called Court Martial (air date Feb 2, 1967) where Captian Kirk faces a panel of four Space Command officers with fancy insignia suggesting high rank, but the room is devoid of any Start Fleet Command logos or insignia. It appears there was as yet no Star Fleet command logo at the start of 1967.

The image on the right is from the Star Trek Discovery series, for which the first episode was September 24, 2017

The patch above is from the US Air Force Space Command, established in September 1982.

“The delta symbol, the central design element in the seal, was first used as early as 1942 by the U.S. Army Air Forces; and was used in early Air Force space organization emblems dating back to 1961.” – elitedaily 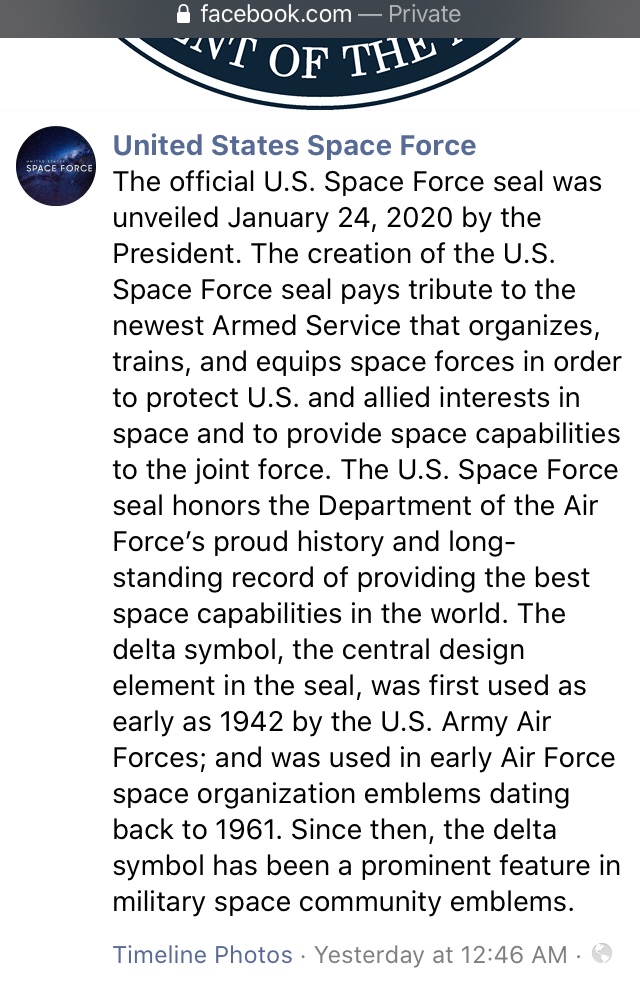 On ebay this is the closest we could find when searching for 1961, stars and delta shapes. 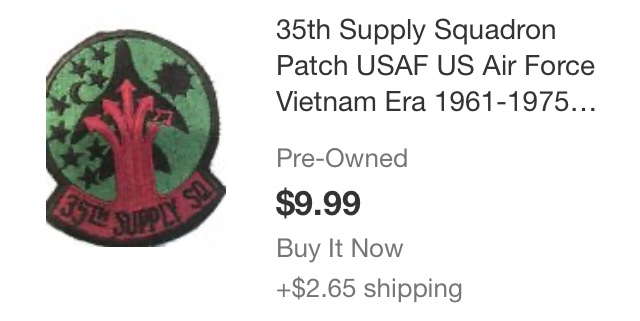 While it is from 2006, this patch also shows the delta shape in use, in other words, not ripping off Trek. For reference again, the logo for the Discovery series did not appear until that series aired, starting September 24, 2017, and we aren’t sure how far into the series it was before the logo appeared, but it was at least 11 years after the US Air Force Space and Missile Command Competition patch.

True Strange News did not track down in what episode the first Star Fleet Command logo appears, but even if it was in the first Trek pilot, it would not have predated the USAF’s use of the delta shape for its space organization patches if the US Space Forces Facebook statement is accurate.

… the new logo is really just a riff on the original U.S. Air Force Space Command emblem, which dates back decades. And among the people to point that out was Michael Okuda, a longtime Star Trek graphic designer who in the 1990s created the Starfleet Command logo for Paramount, which itself was derived from older designs.

“The arrowhead in the U.S. Space Force logo appears to be borrowed from the U.S. Air Force Space Command emblem, which has been in use since the 1980s,” Okuda, who has also designed emblems for NASA, wrote on Facebook. “Arrowheads and swooshes and orbits and stars and planets have been used in space emblems long before either of these emblems,” he wrote.

Few have never seen the Star Fleet Command logo, so it is reasonably possible that during creation and review of all drafts for the new real US Space Force logo, Star Trek did, at least subconsciously, have an influence.

A mutual influence between SciFi and the military goes way back.

Being a fan of both Star Trek and of the US Armed Forces including the new Space Force, (when used appropriately,) we offer this little bit of fact checking for the good of both.

I suspect the delta symbol “first used as early as 1942 by the U.S. Army Air Forces” may refer to the insignia for the Air Force Air Transport Command, established in 1942.